The Internet was formed without government help, and has survived quite well without interference. The CyberArmy believes that we don't need hundreds of Internet censorship, control, and administration laws. Do you know that in many countries (USA included), your long distance telephone calls, and email are filtered through govenment computer labs (the 'Echelon' organisation in the US, Canada, Australia, NZ, and UK), which checks your communication for subversive content? And not just governments. Big business is constantly trying to throw its weight around on the net - bullying small companies on domain name issues, the Music and Motion Picture industries. Recently, the MPAA (Motion Picture Association of America) has tried to ban Linux software which plays DVD movies. They don't have much legal or moral authority to ban a piece of software, but unless small individuals comply, we are forced to concede, or face costly litigation.

So what about internet abusers? We don't believe in complete deregulation of the Internet - that's anarchy and we would be hit with tons of spam email each day and no one with power to stop it. But do spammers and scammers justify the government getting involved in the Net? That's always the argument they give. The Net isn't a national thing that can be controlled by national governments.

What our idea is that the Internet users can regulate these people ourselves. In just the last few months (early 2000), we have shut down three spammers, got over 1000 faxes sent to the US congress about Echelon, got about 500 people to complain at once to the MPAA about DeCSS. And so on. Recently. Not that this will solve the problems of net. But its a more effective way of handling things than any governments have been able to manage.

CyberArmy.com started out as a free webpage hosted on xoom.com, in mid 1998! It was basically a page which had a pile of web tools on it which I used every day (now portal.cyberarmy.com). No one else had that sort of page yet, and all my friends on the Midnight BBS started using it quickly as their start page. I think it took about a week until it was getting 1000 hits a day. What is strange is that it only took about 12 hours for xoom.com to delete the site. We were then donated space by arctik.com and electronicarmy.com. Name 'cyberarmy.com' was registered about a month later (late 1998), and bought some hosting space at hosting2000.com. I asked permission of the visitors then whether I could put an ad banner at the top of the pages to pay for the hosting, and they thought it was cool. The discussion forum, top 50, and search engines were added. Hosting2000 were excellent, and even though we were getting near 10,000 hits a day, they didn't kill the account. 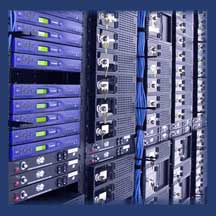 In early / mid 1999, we leased a RedHat Linux server, and co-located it at Digital Nation. In the picture is the rack of servers co-located there. CyberArmy is one of the RAQ servers. We added free homepages. We also added the 'Zebulun Challenge' (see below). The visitors to CyberArmy.Com now all had different rankings according to skill, and higer ranks got more power over the site. In a sense, the site became self-regulating. CyberArmy also switched a lot from being more of a 'hacker' related site to being much more of an internet support group.

As of mid 2000, and following articles on MSNBC, CNN, and ZDNet, CyberArmy is getting 100,000 hits per day just on the main pages. We also host around 3,000 free homepages which generate about 20,000 hits a day. We have been discussed on CNN and ZDNET. CyberArmy was listed in January as being around the 2600th most visited site on the Internet (cant remember exactly). Plans for the short term are to add web based email, similar to the email at hotmail, for our visitors. In the medium term, it looks like we will have to move CyberArmy to about 2 or 3 seperate servers, or perhaps one PentiumIII server with a large SCSI drive - it's getting too big for the current server.

The CyberArmy is set up as a regular physical army, just really because that was the name for the site we registered and people wanted it. At last count, we're probably getting near about 35,000 registered troops, a few thousand lieutanants, decreasing until we get to the several Marshals, and the one Commander in Chief. If you want to make a difference for the web, you can join the CyberArmy. Troopers must agree to complete all the missions - thousands of troopers all writing to congress, or all getting involved in a specific mission, is pretty powerful! If you enjoy being a Cyber trooper, you may also like to undertake missions to gain rank in the Zebulun CyberArmy. Set before you is a series of Zebulun challenges. By defeating the Zebulun challenges, you increase your rank. Higher ranks have almost complete control over this website. The first few challenges can be beaten in a few minutes, higher levels can take months to defeat - but most of this website is hidden deep within the Zebulun levels. Higher levels also get more say in the choosing and running of CyberArmy campaigns. So take the challenge now! Some of these challenges are, like, breaking javascript locks to the next level, talking a password for the next level out of a bot, beating the server in a game of blackjack, etc. Higher ranks can suggest missions which the cyberarmy should undertake that fit in with our statement of purpose. Then, the whole officer core of the Zebulun cyberarmy can vote on whether we do that mission or not. Higher ranks have more say, and if the mission proposal is passes, all troopers have comitted themselves to complete the mission.

*See Update
CyberArmy is run by me, the Commander in Chief, Overlord. In the real world, Im a student and also run some university servers and do some coding, etc. For more info about me, read about my beliefs.

As of Mid 2000, I've stopped trying to run this whole site myself. It's way too large now. I've delegated a lot of power to CyberArmy Marshals:

Site has been updated, tweaked, and fixed. It is now run, hosted, and operated by:

For Historical memories we left the original list of Marshals intact:

Marshal A1B4
Location: unknown
E-mail: a1b4@cyberarmy.com
PGP Key: none Personal homepage: A1B4's Domain
Area of his work: Commander of the Special Operations Division
General information: A really old visitor - since 1998, Perl coder and the inventor of the famous kernelbot (meet him on #cyberarmy).

Marshal chawmp
Location: unknown
E-mail: tom@holodeck.f9.co.uk
PGP Key: none Personal homepage: none
Area of his work: Commander of Internal Command who makes sure that CyberArmy keeps working, provides member support and also works for CyberArmy improvement
General information: C and Perl programmer, hacked his way to General in October, 2000 and was awarded for Marshal after writing the brigade scripts. He has put more effort into the brigades etc. than can be imagined. He's really one of the biggest talents here.

Marshal Kaladis
Location: Germany
E-mail: kaladis@cyberarmy.com
PGP Key: kaladis.asc Personal homepage: Kaladis Realm
Area of his work: Commander of the Propaganda Command who cares about external communication, media and the like. He also does some organisation.
General information: Certified TCP/IP Administrator and Internet Security Specialist who improved this site a lot, especially with organisative work.

Marshal MrYowler
Location: USA
E-mail: mryowler@yahoo.com
PGP Key: none Personal homepage: none
Area of his work: General stuff
General information: Friendly, articulate and knowledgeable member of the CyberArmy. He knows a lot about computer security, server administration, and networking, and owns one of the servers used by this site, and has 3 eyes.

Marshal TheGame
Location: unknown
E-mail: jointhegame@crosswinds.net
PGP Key: none Personal homepage: The Game
Area of his work: General scripting and coding
General information: Without TheGame, zebulun probably would still be being made. TheGame is a professional Perl coder / Unix administrator, and he has put more effort into zebulun (and zeb database structure) and the wwwboard scripts than can be imagined.

Marshal xenographic
Location: USA
E-mail: xenographic@hotmail.com
PGP Key: none Personal homepage: none
Area of his work: General Assistance
General information: Knows much stuff about anything. Great Perl and C coder and also one of the oldest visitor here. 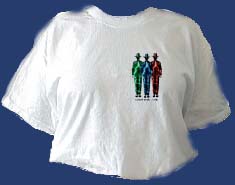 Cyberarmy t-shirts, mugs, and mouse mats are available from the Cyberarmy Store. All this stuff is handled by an outside company. The t-shirt has a cyberarmy logo on the front, and the back has The Hacker Manifesto.

We badly need cash to run this site and pay for the server, so if someone wants to buy the site for $650,000 and we'll keep running it, and we can forget about server costs, and we will run it for you and send you anything it makes. Otherwise, if you're an oil sheik, send money now.

There are several ways you can contact CyberArmy. Please choose what type of comment or question you have. We get thousands of emails - 90% of them are junk. We get way too many stupid / annoying emails to bother answering them all. So please make sure your message is about the website, and is important.

Want to Assist with the site?

quote of the minute:


The recent mission was aborted by Marshal anomaly due to illegality. You should propose or vote on a new mission. Until then, visit the rain forest site and click to save a small piece of rainforst (its free).